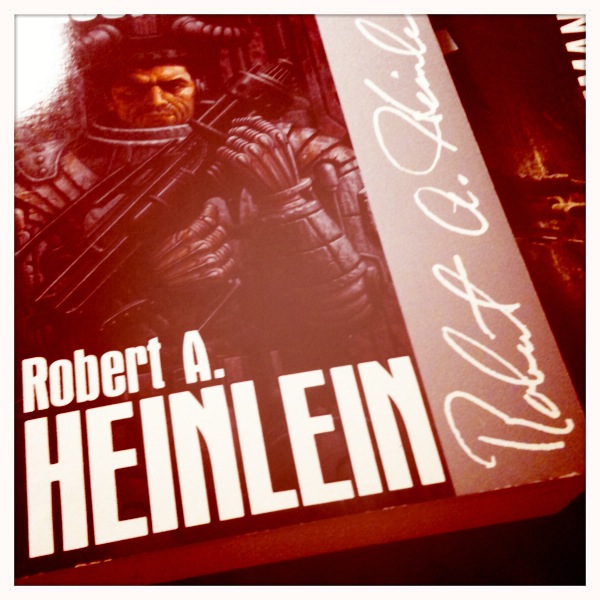 For all that I watch a fair amount (okay maybe a lot) of science fiction, I haven’t read a lot of it, and what I do watch is primarily newer Sci Fi. So I am sadly lacking in my understanding of the history of science fiction, though I most likely know more than your average 23 year old girl.

A friend of mine recommended two books to me; Robert Heinlein’s Starship Troopers, as well as Joe Haldeman’s The Forever War. Both are strongly representative of military cultures, and both reflect clear impacts of The Second World War, and the Vietnam War, respectively.

Society in Heinlein’s world is arranged in a system of intense military discipline, even outside the army itself, it is hard for Heinlein’s characters to conceive of a society such as ours. Where people are killed, murdered, and others are scared to walk outside their doors.

“I don’t see anything wrong with our system; it’s a lot better than not being able to walk outdoors for fear of your life – why, that’s horrible!” (117)

Heinlein’s Starship Troopers exists in a meritocracy. A society where only those who serve in the military can vote – though only after completing their military service (any time after you survive through 2 years). Heinlein’s book got me thinking, as a Political Science graduate I feel strongly about the importance, the duty of voting and taking part in the political process of your country, your community, your society. But I truly do not know if I would be brave enough to travel across space to fight an alien enemy in order to keep my right to vote.

I don’t even know if I would have it in my to join the modern day military – fighting other human beings – to keep my right to vote. I like to think that in trying times, in times of great conflict and military action to right a true wrong, I could do what is right, what is needed to protect my family and my country. But I don’t know if I actually could. I’ve never been tested in this way, or faced with these kinds of decisions.

What would you do for the right to vote? Think about it. How far would you go.

Would you join the army? Would you go to war for 2 years?

What if the enemy was alien, and the battlefield stars away?

Heinlein’s Starship Troopers is a world where the army lets you freely leave at any point, a world where to be a citizen you have to go through hell on a faraway planet. They are spoiled with recruits but those who make it through basic training still have years to go before the right to call themselves a ‘citizen’ of earth.

How far away from home would you go? How much pain would you go through? How much fear? And then when everything changes, and you lose almost everything, would you keep going? For no other reason than that’s what you signed up for, what you’ve always done?

“Nevertheless I had signed up in order to win a vote.
Or had I?
Had I ever cared about voting? No, it was the prestige, the pride, the status…of being a citizen.
Or was it?
I couldn’t to save my life remember why I had signed up.” (162)